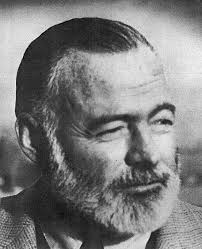 One of my MFA students, doing one of the brief essays on craft we have our writers do at Fairleigh Dickinson, was writing about The Old Man and the Sea and cited Hemingway’s “Iceberg Principle” as he laid it out in his Paris Review spring 1958 interview.  Here’s the pertinent passage:

“If it is any use to know it, I always try to write on the principle of the iceberg. There is seven-eighths of it underwater for every part that shows. Anything you know you can eliminate and it only strengthens your iceberg. It is the part that doesn’t show. If a writer omits something because he does not know it then there is a hole in the story.”

(Hemingway says the same thing in Death in the Afternoon, Scribner’s, 1932, Chapter 16, p. 192:  “If a writer of prose knows enough about what he is writing about he may omit things that he knows and the reader, if the writer is writing truly enough, will have a feeling of those things as strongly as though the writer had stated them. The dignity of movement of an iceberg is due to only one-eighth of it being above water.”)

Invisible knowledge? Or visible bullshit?  Because how, you have to wonder, is a reader supposed to intuit what’s omitted? Or that what’s omitted constitutes a sort of basis of authority—which is, really, what Hemingway is saying, right? That a reader will sense, from the rightness of the details he so sparingly includes, that a writer knows what he’s talking about?  There’s a lot to be said for authority—for making the narrative voice so convincing that a reader can happily be carried along—but I think authority can be assumed.I think it has everything to do with voice.  For instance, I might learn enough to write convincingly about shooting—and never have fired a gun in my life.  Or consider the example of writers of historical fiction. One sounds like she lived the life. Another sounds like she read a few books about the period. But neither of them lived it—they both got what they know from research.

And, it’s kind of funny, in the same Paris Review interview, Hemingway says:  “A writer, if he is any good, does not describe. He invents or makesout of knowledge personal and impersonal and sometimes he seems to have unexplained knowledge which could come from forgotten racial or family experience. Who teaches the homing pigeon to fly as he does; where does a fighting bull get his bravery, or a hunting dog his nose?”

Coincidentally, in the same batch of essays, another student wrote about “playing the silence” in Raymond Carver’s work, specifically his short story, “Why Don’t You Dance?” In making his point, he (the student, Brian Bradford, an interesting writer himself) quoted Miles Davis: “It’s the notes you don’t play that make the difference.”

“It is not only what [Carver] writes, but what he expertly omits that creates a sort of silence that allows his readers, through their own extrapolations, wider access into the lives of his characters.”

Sounds familiar. But Brian, I think, is saying something somewhat different, maybe a bit more subtle. He remarks on the nature of the details that Carver does include, how much they say about what’s not said (a little example: that the character “pours another drink” is the only reference to alcohol in the story, but it suggests something more than a guy having one drink).

What Brian says is: “This is Carver, at his minimalist best–playing the silence, courting conjecture.”  And that, “courting conjecture,” is a brilliant way to put it. The writer’s authority, finally, resides in an ability to get a reader to understand what’s not being said.

A side note:  the Carver’s story “Why Don’t You Dance?” is included in his collection What We Talk About When We Talk About Love, which was made into the 2010 film written and directed by Dan Rush & starring Will Ferrell, “Everything Must Go.”

Nine of Carver’s stories (and one poem) were also the basis of the 1993 Robert Altman movie (with a screenplay by Altman & Frank Barhydt) “Short Cuts”:

“Neighbors“
“They’re Not Your Husband“
“Vitamins“
“Will You Please Be Quiet, Please?“
“So Much Water So Close to Home” (a killer story)
“A Small, Good Thing” (another great one)
“Jerry and Molly and Sam“
“Collectors“
“Tell the Women We’re Going“
“Lemonade” (poem) 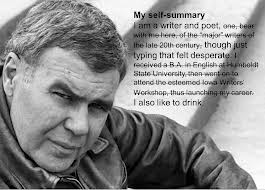 This entry was posted in All, Blog and tagged Ernest Hemingway, Everything Must Go, Iceberg Principle, Paris Review interview, Raymond Carver, Short Cuts, What We Talk About When We Talk About Love. Bookmark the permalink.