“[T]he best job that was ever offered to me was to become a landlord in a brothel.”–William Faulkner

Turning off a recorded show today, I came across the 1940 movie “Let’s Make Music” 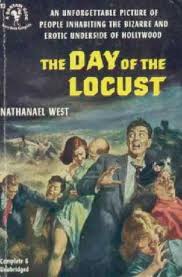 directed by Leslie Goodwins (?), with a screenplay by–of all

wonders among Hollywood writers–Nathanael West, whose Day of the Locust is justly considered one of the best novels ever written about Los Angeles, city of fallen film angels.  Here’s the description from TCM:  “An elderly schoolmarm makes a hit in New York after a band leader jazzes up her corny song.”

In the beginning, the schoolmarm is subjecting a small class of Hollywood style teen louts to what she describes as “the most dramatic of Chopin’s scherzos.  Irony, she says, “lurks in its polished phrases, and fever and seething scorn.  Some people feel the cadences following the three chords represent a beautiful waterfall.”  At which point one of the “students” hits a bust of Beethoven with a projectile launched from a slingshot.

“I don’t know why I ever took this course,” the same boy complains.  “It’s as dry as eating a blotter.”

“This is a class in music appreciation,” a girl next to him tartly replies.  “You’re not supposed to enjoy it.” 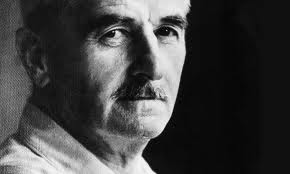 I was reminded of William Faulkner, another great writer (ok, greater) who, though he said in his Paris Reviewinterview in spring of 1956 that “the writer doesn’t need economic freedom,” did spend a good amount of time in the movie business, presumably to make money.  “The Big Sleep” is one of his screenplays, and he was an uncredited writer on a number of films, including “Mildred Pierce” and “Gunga Din.”  (A number of his novels and stories somehow got turned into TV plays, which I’ve never seen, though I enjoy trying to imagine the teleplays for As I Lay Dying or The Sound and the Fury.)

Anyway, I remembered reading Faulkner’s hilarious account of a “legendary Hollywood experience,” also from that interview in The Paris Review.  It’s a bit long-winded but worth every word, copied below.  The whole interview can be read here:
http://www.theparisreview.org/interviews/4954/the-art-of-fiction-no-12-william-faulkner

I had just completed a contract at MGM and was about to return home. The director I had worked with said, “If you would like another job here, just let me know and I will speak to the studio about a new contract.” I thanked him and came home. About six months later I wired my director friend that I would like another job. Shortly after that I received a letter from my Hollywood agent enclosing my first week’s paycheck. I was surprised because I had expected first to get an official notice or recall and a contract from the studio. I thought to myself, the contract is delayed and will arrive in the next mail. Instead, a week later I got another letter from the agent, enclosing my second week’s paycheck. That began in November 1932 and continued until May 1933. Then I received a telegram from the studio. It said: “William Faulkner, Oxford, Miss. Where are you? MGM Studio.”

The young lady operator said, “Where is the message, Mr. Faulkner?” I said, “That’s it.” She said, “The rule book says that I can’t send it without a message, you have to say something.” So we went through her samples and selected I forget which one—one of the canned anniversary-greeting messages. I sent that. Next was a long-distance telephone call from the studio directing me to get on the first airplane, go to New Orleans, and report to Director Browning. I could have got on a train in Oxford and been in New Orleans eight hours later. But I obeyed the studio and went to Memphis, where an airplane did occasionally go to New Orleans. Three days later, one did.

I arrived at Mr. Browning’s hotel about six p.m. and reported to him. A party was going on. He told me to get a good night’s sleep and be ready for an early start in the morning. I asked him about the story. He said, “Oh, yes. Go to room so-and-so. That’s the continuity writer. He’ll tell you what the story is.”

I went to the room as directed. The continuity writer was sitting in there alone. I told him who I was and asked him about the story. He said, “When you have written the dialogue I’ll let you see the story.” I went back to Browning’s room and told him what had happened. “Go back,” he said, “and tell that so-and-so—. Never mind, you get a good night’s sleep so we can get an early start in the morning.”

So the next morning in a very smart rented launch all of us except the continuity writer sailed down to Grand Isle, about a hundred miles away, where the picture was to be shot, reaching there just in time to eat lunch and have time to run the hundred miles back to New Orleans before dark.

That went on for three weeks. Now and then I would worry a little about the story, but Browning always said, “Stop worrying. Get a good night’s sleep so we can get an early start tomorrow morning.”

One evening on our return I had barely entered my room when the telephone rang. It was Browning. He told me to come to his room at once. I did so. He had a telegram. It said: “Faulkner is fired. MGM Studio.” “Don’t worry,” Browning said. “I’ll call that so-and-so up this minute and not only make him put you back on the payroll but send you a written apology.” There was a knock on the door. It was a page with another telegram. This one said: “Browning is fired. MGM Studio.” So I came back home. I presume Browning went somewhere too. I imagine that continuity writer is still sitting in a room somewhere with his weekly salary check clutched tightly in his hand. They never did finish the film. But they did build a shrimp village—a long platform on piles in the water with sheds built on it—something like a wharf. The studio could have bought dozens of them for forty or fifty dollars apiece. Instead, they built one of their own, a false one. That is, a platform with a single wall on it, so that when you opened the door and stepped through it, you stepped right off onto the ocean itself. As they built it, on the first day, the Cajun fisherman paddled up in his narrow, tricky pirogue made out of a hollow log. He would sit in it all day long in the broiling sun watching the strange white folks building this strange imitation platform. The next day he was back in the pirogue with his whole family, his wife nursing the baby, the other children, and the mother-in-law, all to sit all that day in the broiling sun to watch this foolish and incomprehensible activity. I was in New Orleans two or three years later and heard that the Cajun people were still coming in for miles to look at that imitation shrimp platform which a lot of white people had rushed in and built and then abandoned.

This entry was posted in All, Blog and tagged Day of the Locust, Let's Make Music, Nathanael West, Paris Review interview, William Faulkner, writers in Hollywood. Bookmark the permalink.