was short-listed for both the Man Booker Prize and the Orange Prize, came to read at the British residency of my MFA program a few years ago.  She read the excerpt I’ve reproduced below, from her novel The Accidental.

It made the hairs on my arms stand on end, which I think had only happened one other time, when I heard JAIMY GORDON

read the opening section of her novel Bogeywomanat a women’s writing thing at Brown University, where I finally met JOANNA SCOTT 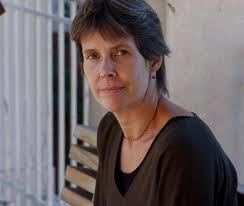 (we had the same editor then) (I was impressed to hear her singing the Barney song–“I love you, you love me, we’re a great big family”–to her little one over the phone from our shared attic accommodations), who was given the cold shoulder by the obscure others because she’d managed to win a MacArthur Award; also, there was a secretary/poet called Eurydice.

Anyway, what Ali Smith read was amazing.  I read the book.  I listened to it on CD.  And to pass it on, I typed out the section below.  My stepson, a very smart, highly educated, very literate young man, was visiting, and I showed him this passage, which is a brilliant amalgam of cultural references, most of them cinematic, since the main character is in some ways a creature of popular culture (she begins:  “My mother began me one evening in 1968 on a table in the cafe of the town’s only cinema.  One short flight of stairs away, up behind the balding red velvet of the Balcony curtain, the usherette was yawning, dandling her off torch, leaning on her elbow above the rustlings and tonguings of the back row and picking at the wood of the partition, flicking little splinters of it at the small-town heads in the dark.”)

My stepson is (obviously) considerably younger than I, and he got only some of the references–but mostly, he was baffled, and troubled that he didn’t know what he was supposed to get.  This was a kind of shock (and disappointment) to me; some of these references were beyond me as well, but the author’s ability to make of her character a sort of cultural efflorescence seemed so brilliant, so canny, so right for her story, that I couldn’t imagine confusion or doubt getting in the way of my appreciation of her tale, or her telling of it.  That, anyway, is my hall pass for the unimpressed.  I think Ali Smith is wonderful, and the book (and her others, which I promptly read, too) a work of genius or something remarkably close.  See for yourself: 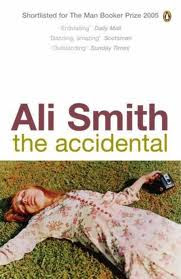 From The Accidentalhttp://www.amazon.com/Accidental-Ali-Smith/dp/1400032180/ref=sr_1_1?s=books&ie=UTF8&qid=1372571107&sr=1-1&keywords=the+accidental:
I was born in a trunk.  It was during the matinée on Friday.  I stopped the show.
I was born in the year of the supersonic, the era of the multistorey multivitamin multitonic, the highrise time of men with the technology and women who could be bionic, when jump-jets were Harrier, when QE2 was Cunard, when thirty-eight feet tall the Princess Margaret stood stately in her hoverpad, the année érotique was only thirty aircushioned minutes away and everything went twice the speed of sound.  I opened my eyes.  It was all in colour.  It didn’t look like Kansas any more.  The students were on the barricades, the mode was maxi, the Beatles were transcendental, they opened a shop.  It was Britain.  It was great.  My mother was a nun who could no longer stand the convent.  She married my father, the captain; he was very strict.  She taught us all to sing and made us new clothes out of curtains.  We ran across the bridges and jumped up and down steps.  We climbed trees and fell out of the boat into the lake.  We came first in the singing contest and narrowly escaped the Nazis.
I was formed and made in the Saigon days, the Rhodesian days, the days of the rivers of blood.  DISEMBOWEL ENOCH POWELL.  Apollo 7 splashdowned.  Tunbridge Wells was flooded.  A crowd flowed over London Bridge, and thirty-six Americans made bids to buy it.  They shot the king in Memphis, which delayed the Academy Awards telecast for two whole days.  He had a dream, he held these truths to be self-evident, that all men were created equal and would one day sit down together at the table of brotherhood.  They shot the other brother at the Ambassador Hotel.  RIGHTEOUS BROS it said in lights, about the hotel car park.  Meanwhile my father was the matchmaker and my mother could fly using only her umbrella.  When I was a child I ran the Grand National on my horse.  They didn’t know I was a girl until I fainted and they unbuttoned my jockey shirt.  But anything was possible.  We had a flying floating car.  We stopped the rail disaster by waving our petticoats at the train; my father was innocent in prison, my mother made ends meet.  I sold flowers in Covent Garden.  A posh geezer taught me how to speak proper and took me to the races, designed by Cecil Beaton, though they dubbed my voice in the end because the singing wasn’t good enough.
But my father was Alfie, my mother was Isadora.  I was unnaturally psychic in my teens.  I made a boy fall off his bike and I burned down a whole school.  My mother was crazy; she was in love with God.  There I was at the altar about to marry someone else when my boyfriend hammered on the church glass at the back and we eloped together on a bus.  My mother was furious.  She’d slept with him too.  The devil got me pregnant and a satanic sect made me go through with it.  Then I fell in with a couple of outlaws and did me some talking to the sun.  I said I didn’t like the way he got things done.  I had sex in the back of the old closing cinema.  I used butter in Paris.  I had a farm in Africa.  I took off my clothes in the window of an apartment building and distracted the two police inspectors from watching the madman on the roof who was trying to shoot the priest.  I fell for an Italian.  It was his moves on the dancefloor that did it.  I knew what love meant.  It meant never having to say you’re sorry.  It meant the man who drove the taxi would kill the presidential candidate, or the pimp.  It was soft as an easy chair.  It happened so fast.  I had my legs bitten off by a shark.  I stabbed the kidnapper, but so did everybody else, it wasn’t just me, on the Orient Express.
My father was Terence and my mother was Julie.  (Stamp.  Christie.)  I was born and bred by the hills (alive) and the animals (talked to).  I considered myself well in, part of the furniture.  There wasn’t a lot to spare.  Who cared?  I put on a show, right here in the barn; I was born singing the song at the top of my just-formed lungs.  Inchworm.  Inchworm.  Measuring the marigolds.  Seems to me you’d stop and see how beautiful they are.  I rose inch by inch with the international rise of the nose of Streisand, the zee of Liza.  What good was sitting alone in a room?  When things went decimal I was ready for it.
I was born in a time of light, speed, celluloid.  Downstairs was smoking.  The balcony was non.  It cost more money to sit in the balcony.
The kinematograph.  The eidoloscope.  The galloping tintypes.  The silver screen.  The flicks.  The pictures.  Up rose the smoke.  Misty watercolour memories.
But it’s all in the game and the way you play it, and you’ve got to play the game, you know.
I was born free, I’ve had the time of my life and for all we know I’m going to live forever.

Here are some of the references:

This entry was posted in All, Blog and tagged Ali Smith, Hotel World, Jaimy Gordon, Joanna Scott, The Accidental, The Lord of Misrule. Bookmark the permalink.