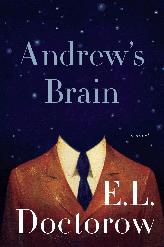 Here’s a bonbon for your brain, from E.L. Doctorow’s. Or is it for your mind? That’s the question threading through the writer’s latest novel, which takes the form of a dialogue between a cognitive scientist, Andrew, apparently a patient, and someone who seems to be a psychiatrist. This “Doc,” as Andrew calls him now and then, naturally contributes mainly clarifying comments and the occasional prompt, an efficient way of directing and structuring the story, such as it is — anticipating a reader’s questions, stepping out of sequence to supply background where needed, allowing for the sideways glance.

What we have here is an accounting, through a series of sessions and the odd journal entry, of Andrew’s history, working backward from his giving (surprise!) his baby daughter by a new wife, now dead, to his ex-wife, whose own baby (also Andrew’s) died some time ago, putting a painful period to that marriage. A neat exchange.

What we quickly learn is that disaster attends Andrew, and what we are waiting to learn is what disaster precipitated this accounting, an explanation of sorts. And as he explains, avoiding the main event (“Because I don’t want to speak of what happened,” he says, or, “So now you know why I’m here,” though we don’t), we come to understand that Andrew, not without reason, holds himself responsible for all of the awful things that happen to those he happens to be close to. Not without reason — and yet, this is wildly superstitious for a cognitive scientist.

But the limits of cognition, the ability (or inability) of the brain to know itself — or of the brain to know the mind, or the mind to know the brain, or either to know the difference — are very much Doctorow’s subject, as Andrew tries to come to terms with a series of unfortunate events worthy of Lemony Snicket. But these are the Bush years, so what happens is deadly serious, and Andrew somehow ends up at the dead center of world events, in his self-defining paranoia managing to feel responsible for, say, a death in the Twin Towers on 9/11.

This is a brief book and, like many of the author’s recent offerings, a seemingly simple pleasure. But Doctorow cannot do anything simply, and he can’t help but write well. His lines in passing are the sort that other writers might work for years to perfect. And his insights, beautifully embedded in an irresistible story, are worthy of the best sort of big book.

“Thoughts of Briony [his young wife] gave me all sorts of perceptive advantages,” Andrew tells the doctor. “It was as if something of her mind was alive in me.”

“Is that cognitive science?” the doctor asks.

And when the question comes up again, many pages on, “It’s still only suffering.”

Not, however, for us. That’s the virtue of pretending, “the brain’s work,” as Andrew tells the doctor, and Doctorow’s work as well, done so well that we might feel it and yet feel better for it.

This entry was posted in All, Blog, Reviews and tagged Andrew's Brain, Doctorow, Minneapolis Star Tribune, review. Bookmark the permalink.