Looking for a favorite story of mine, Philip Graham’s “I Dreamt About You Last Night,” from his collection The Art of the Knock, I found this interview Graham did in 2013 for Fiction Writers Review, with a writer I wasn’t aware of, Angela Woodward, whose book End of the Fire Cult the two discussed under the heading “Marriage as ethnography.” 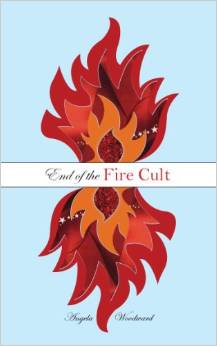 In the book, published by Ravenna Press in 2010, a man and wife inventing competing countries (Marmoral, hers, and Belgave, his) that mirror their “real” lives. The drama of their marriage (“an unfolding conjugal diplomatic crisis,” in Graham’s terms) is then enacted through these countries’ relations, especially when another country threatens to invade.

Woodward: “Nothing is more common in literature than a story of lovers finding each other or disentangling from each other, and there’s infinite variation in the stories of getting together and falling apart. Usually we tell these stories through character, trying to convey individual feelings, to show what’s unique about a particular couple’s very common situation. Fire Cult goes at this common situation by making the emotional interiority exterior.” 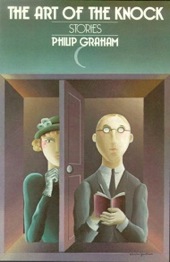 I did finally find the story, but only an excerpt that doesn’t reflect the wonderful crafty conceit of the story (lies the husband’s told his wife, which she’s painted on the walls of their house on her way out, leaving him with their child; painted over, the lies pulse through the story as they’re remembered & revealed one by one, cruelly informing what’s happening).

This entry was posted in Blog, Reading Notes and tagged Angela Woodward, Art of the Knock, End of the Fire Cult, Philip Graham. Bookmark the permalink.