In light of my review of Edwidge Danticat’s Claire of the Sea Light, a note on another book, and another writer, close to the author’s heart.

The University of Nebraska Press recently brought out The Infamous Rosalie, by the celebrated Haitian writer Evelyne Trouillot (translated by M. A. Salvodon), with a foreword by Edwidge Danticat.  The title refers to the slave ship that carried the main character’s grandmother and godmother to Saint-Domingue (now Haiti)–the awful voyage becoming one of the memories passed down to Lisette, whose own story takes place in the midst of a revolution that would transform this insular world. 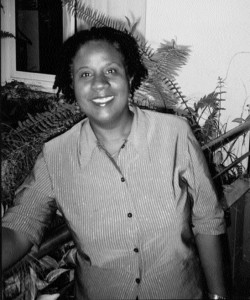 The winter 2005 issue of BOMB featured an interview Danticat conducted with Trouillot (introduced by Madison Smartt Bell, who of course has his own investment in the literary Haiti.).  Speaking of writing in the wake of the Gonaives tragedy–thousands killed and hundreds of thousands left homeless in that port city by Tropical Storm Jeanne–Trouillot says:  “Writing can be both a task of memory, or homage, and simply a hand held out, the offer to share a sadness that’s too heavy to bear alone. To continue working and try to make a difference constitutes both an obligation and a renewal.”

She speaks thoughtfully and forcefully of writing as a form of engagement–the writer as citizen.

When asked which she prefers writing, fiction or poetry, Trouillot says:  “Every idea appears in the form that best suits the project of writing it down.”

The two writers, Danticat and Trouillot, clearly share a sense of fiction giving form to history as it is lived. 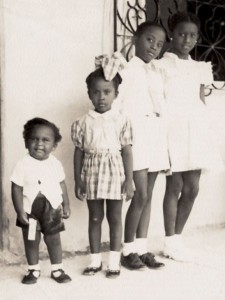 Evelyne Trouillot (second from left) with her siblings in front of the family home, ca. 1958, Port-au-Prince, Haiti.

This entry was posted in All, Blog and tagged Edwidge Danticat, Evelyne Trouillot, Haiti. Bookmark the permalink.