If It’s Not One Thing It’s Your Mother, Julia Sweeney 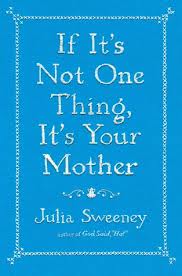 I’ve found myself giving or recommending this book to everyone I know who’s adopted a child from China, because Julia Sweeney writes so well and hilariously (and sweetly) about doing so herself.  But adoptive parents are a pretty small and specific demographic; and so, when I heard again from one of these readers

(here’s what one, a typical, email said):

“I’m rereading the Julia Sweeney book you sent me because I loved it so much.  Many parts were a great comfort to me!”

I of course started thinking about the book and how much I, who’ve adopted no children, from China or elsewhere, loved it, in part because Julia Sweeney seems like my sister from another family (as is true for a lot of her readers, I think, and a big part of her charm).  Here’s another email about the book, this one from Laurie Hertzel, not even a mother, let alone adoptive:

“I read the part about Mulan asking about the facts of life and I was laughing so hard the tears were streaming down my face.  doug, who was propped up against pillows next to me in bed, reading Kent Haruf’s Benediction, turned and said, ‘in MY book they’ve just called in the hospice workers.'” 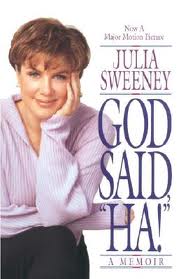 Sweeney (the androgynous Pat, from Saturday Night Live, may be sadly how most people know her) earlier wrote God Said Ha! about losing a brother to cancer, among other things, which I’d picked up because, uh, I’d just lost my mother to cancer–and damn! it was funny.  Which is something you don’t often say about a book about cancer and death.

But again, the book’s about family.  And the thing is:  However her books might hook you in with some kind of link to your life, Sweeney is really appealing because she’s so good at articulating what it’s like to be human.  And everyone can like a book about that.

And it doesn’t hurt that she makes being human sound kind of nice.

This entry was posted in All, Blog and tagged adopted from China, God Said Ha, If It's Not One Thing It's Your Mother, Julia Sweeney. Bookmark the permalink.