In class with Ginsberg, Mailer, & Burroughs

Reading a collection of interviews with Allen Ginsberg, edited by Michael Schumacher, to be published by the University of Minnesota Press in Spring, 2016, I came across one entry in which Ginsberg describes asking Norman Mailer and William S. Burroughs, who were in the literary line-up at Naropa Institute’s 1984 summer writing program, to visit his class. In the interview (originally published in Naropa Magazine, vol. 2, 1985) Ginsberg turns the class into a conversation among the three writers. And in his lead-in, he offers an extended, nuanced explanation of the poetry of truly seeing. 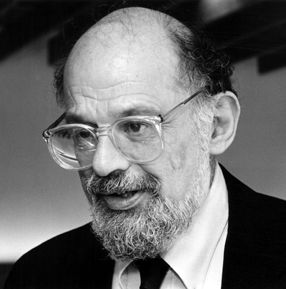 “ALLEN GINSBERG: . . . . Mailer said they were coming to this class later, which surprised me. He said he wanted to hear me teach, which puts me in an odd position. So the problem is how to get them to teach, or get them engaged. So what I’ll do is just continue from where I was until they turn up.

“The theme we were on last class was Flaubert’s ‘The ordinary is the extraordinary.’ In other words, the way to point to the existence of the universe is to see one thing directly and clearly and describe it.

Blake’s Labor well the minute particulars; Kerouac’s Details are the life of prose and Don’t stop to think of the words but to see the picture better; Pound’s The natural object is always the adequate symbol and Direct treatment of the thing; Williams’s No ideas but in things and Clamp the mind down on objects; and Trungpa’s Things are symbols of themselves.

If you have an unobstructed perception of a thing, then it stands in eternity with its own characteristics and is an eternal object (if you want to use that kind of vocabulary). If you see something as a symbol of something else, then you don’t experience the object itself, but you’re always referring it to something else in your mind. It’s like making out with one person and thinking about another. So along the same lines, I’d like to refer you to some poems by Charles Reznikoff, who is one of the erudite, lesser-known writers of the early part of this century. He lived in New York and was a friend of William Carlos Williams and Ezra Pound, and was one of the original imagist-objectivist poets of 1918–1925. He printed up his own books in editions of two hundred, so he’s not generally well-known. I occasionally ran across him in Bryant Park and he read at St. Mark’s Poetry Project in New York a few times. These are from a series, ‘Sunday Walks in the Suburbs’:

A bitch, backbone and ribs showing in the sinuous back, sniffed for food, her swollen/udder nearly rubbing along the pavement./ Once a toothless woman opened her door, chewing a slice of bacon that hung from/her mouth like a tongue.

” This is one of the most vivid pictures I’ve read, or seen.”