John Freeman, How to Read a Novelist, a review

On October 26 (playing catch-up here), the Minneapolis Star Tribune published my review of John Freeman’s How to Read a Novelist.

Shortly thereafter, the Star Trib’s book editor, Laurie Hertzel, and I went to see Freeman being interviewed by Louise Erdrich at Majors & Quinn, a wonderful bookstore in the Twin Cities (where Erdrich also has a bookstore), the conceit being that whereas Freeman’s book was a compilations of his interviews with writers (including Erdrich), his publicity tour would be made up of writers interviewing him.  It was pretty charming–and interesting to hear Erdrich say that she assumes reviewers are out to get writers (her).  Laurie wrote about it in her book blog. 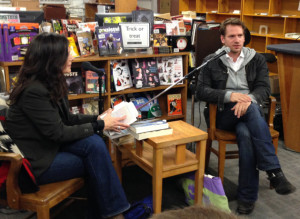 This book really should be called “How to Talk to a Novelist” — which is what John Freeman does here, along with (maybe even more) talking about novelists. All of the pieces collected here — brief profiles of many of the more interesting or celebrated novelists of our time — are based on interviews conducted over the past 13 years for publication in newspapers (including the Star Tribune) and a couple of journals. This necessarily limits their depth, but the sheer number of them, and the weight of reading and writing they represent, give the volume itself enough breadth to make it a quick overview of and handy guide to the literary scene. 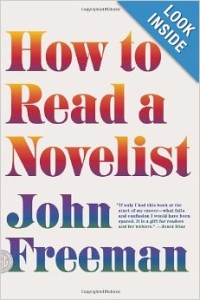 In his introduction, Freeman describes himself as coming “late to reading,” seeking direction from a bookish landlord, who starts him off with Cheever (whom Freeman unwisely dismisses) and Updike, whom he quickly comes to idolize and who eventually, in two interviews separated by some years, apparently teaches him a bit about balancing the public and the private when approaching writers. “The only thing an interviewer can do to capture what a novelist truly does is to make them talk and tell stories, and think aloud,” Freeman says. Consequently, he’s tried to keep himself mostly out of these pieces, he says, though there’s much more of him summarizing and describing than there is of writers talking and telling stories. For instance, he reports having asked Updike if he’d read the Qur’an. “He had,” Freeman tells us, “and then described it with beauty and grace.” We have to take the beauty and grace of Updike’s description on faith.

And yet, in the course of talking to writers as diverse as Toni Morrison, Mo Yan, Peter Carey, Imre Kertész, Amy Tan, Jonathan Franzen, Don DeLillo, Robert Pirsig, Dave Eggers and Ngugi wa Thiong’o, Freeman is sometimes able to elicit wonderfully revealing or insightful remarks. Ian McEwan, talking about studying neurosurgery for his novel “Saturday,” says, “to believe that consciousness proceeds from matter can give you an infinitely rich hold on life.” Louise Erdrich quashes the notion of writer as “medium”: “A voice that is going to take over a story is someone you will have prepared for quite some time.” Updike speaks wistfully of not having written everything he should have: “There’s the fear that somehow you neglected to say what was really yours to say.” Aleksandar Hemon talks movingly of dislocation when, upon seeing a nice townhouse in Georgetown, “I could see the light inside and the people inside moving, and whatever little bit of furniture, and I thought with that kind of pressing clarity: I will never get inside this house.” And Salman Rushdie says of his fame, “The only thing it’s good for now is getting tables in restaurants.”

There’s some crosstalk, too, as, for instance, when A.S. Byatt concedes that the pornographic emptiness of Philip Roth’s “The Dying Animal” isn’t a failure, but a statement: “Without religion we’ve been reduced to sex and death.” Or when Richard Powers echoes McEwan on the false dichotomy of ideas and emotions, saying, “Ideas are an expression of the feelings and the intense emotions we hold about the world.” Or, in a different sort of cross-talk, after a respectful profile of Joyce Carol Oates, Freeman says of Jennifer Egan’s novels that they don’t possess the “morgue-like feel” of Oates’ work. After all, an interviewer can only keep so much of himself to himself.

This entry was posted in All, Blog, Reviews and tagged How to Read a Novelist, John Freeman, Laurie Hertzel, Louise Erdrich, Majors & Quinn, Minneapolis Star Tribune. Bookmark the permalink.