Leaving the Sea, by Ben Marcus, a review

Also in Sunday’s Minneapolis Star Tribune (along with my Doctorow review) was my review of Ben Marcus‘s new story collection, Leaving the Sea.

Here’s the wonderful Harper’s article that I mention in the review.  (And if you doubt that it’s wonderful, here’s what the article is called:  “WHY EXPERIMENTAL FICTION THREATENS TO DESTROY PUBLISHING, JONATHAN FRANZEN, AND LIFE AS WE KNOW IT: A correction.”  The pieces Marcus alludes to (one in the New Yorker, about Gaddis, and another in Harper’s, about how crowds’ failure to materialize at Franzen’s early book tour stops prove that love of literature is dead) are pretty easy to locate.

But while I’m piling on Franzen (can one person pile on?), whose big novels I actually really like but whose brain seems to go into some dark and tiny place whenever he writes anything not fiction, I might as well link to a review he wrote of Colson Whitehead’s John Henry Days, which, the review, I used in a recent practicum on book reviewing as an egregious example of what not to do.  He, Franzen, really does use the word “smallened” in this review.  But that’s nothing compared with his suggestion that male novelists writing from a female perspective might be seeing that narrator/heroine as a “fantasy sex object.” Poor James Joyce!  Poor Molly Bloom! 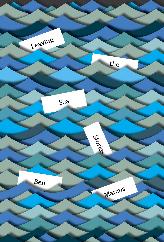 I  first encountered Ben Marcus in 2005 in Harper’s Magazine, where he was mounting a spirited defense of experimental fiction against its mainstream detractors — most notably Jonathan Franzen, whose recent forays into criticism had equated a literary work’s readability (and thus worth) with his own apparently populist taste. Marcus, perhaps not to the populist’s taste, had already tested the limits of the familiar in literary language and form in a couple of story collections, and continued to do so in his recent novel, The Flame Alphabet. What’s fun about this new collection is how smoothly he writes across the full range, from the polished, reader-friendly conventional story to the formally innovative, stylistically adventurous literary performance. What’s fun, actually, is reading any one of these pieces.

Marcus can do and has done the New Yorker story, the epitome and the height (can one be both?) of the literary mainstream, seen here in the homecoming of an estranged adult son irredeemably haunted by his troubled past; a divorced father’s hopeless attempt to keep his job and take care of his sick child; a young man’s alienating sojourn in Düsseldorf for an experimental treatment for a rare autoimmune disease; and a writer’s discomfiting gig conducting a workshop on a cruise ship.

Already little wonders of dislocation, the stories then turn increasingly strange — one son contemplates his mother’s death, the contemplation becoming a sort of calculus of fatalism; another son practices a protocol for evacuation that entails impossible choices; in the seemingly simple act of following a colleague to a beverage cart, a man with a sick wife conjures a whole fantastic but painstakingly realized emotional world. In the title story, the narrator’s six-page, single-sentence account of the breakdown of his marriage mirrors a deeper breakdown.

And then there are stories in which language is subverted or contorted or toyed with to provide a new view of attraction or love or madness or death, making way for inspired sentences like, “In truth, every man’s body is an announcement of a future disappearance.” Or: “My intention had not been to find her, for I had been busy being lonely with someone else.” Or: “Shadows were blind spots that everyone shared.”

Marcus’ whimsical and weird stories sometimes have the matter-of-fact, fairy-tale quality of Donald Barthelme’s work, and sometimes have the renaming, redefining tactics of Kurt Vonnegut’s. More often, though, a darkening perplexity lurks beneath the surface — not far, because the surface is the thing, every story an exercise in testing it, stretching it, seeing how much meaning and music it might contain. The answer, finally, is: plenty. “And though I do not understand the words,” one narrator says, “I enjoy their defeat of silence.” This is writing as likely to satisfy the need for sympathy as it is capable of answering the craving for language that speaks to that need in a new way. It certainly defeats the silence.