(Also, could you punctuate them properly?) 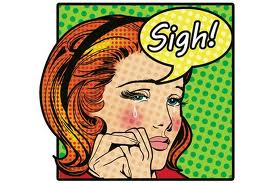 This is something that exercises any number of people.  Here, for instance, is number 3 in Elmore Leonard‘s “ten tips for writers“:

Never use a verb other than “said” to carry dialogue. The line of dialogue belongs to the character; the verb is the writer sticking his nose in. But “said” is far less intrusive than “grumbled”, “gasped”, “cautioned”, “lied”. I once noticed Mary McCarthy ending a line of dialogue with “she asseverated” and had to stop reading and go to the dictionary.

If you only have ten tips, and if they’re this brief and arbitrary, (and if you’re Elmore Leonard) they’re only going to be so useful.  And yet, there’s something to this.

This term, from my new students, all respectable writers, I got:  “Sophia lamented,” “Sophia ordered,” “Sophia complained,” (better) “Brendyn scoffs,” “echoes Sarah,” “Lowen barks,” “Frizzell seethed,” “Frizzell sighed,” “Goldstone chirped,” and yes, finally, “Evie chides,” which may be the most troublesome of all, as it turns what is normally a transitive verb (takes an object–“Danny runs a machine,” rather than “Danny runs”) into an intransitive alternative (that is, how often have you heard “chide” hanging out there in a sentence with no object?  Chides/d whom?  No, in this case, just chides generally.)

The point is, where some dialogue tags other than “said” or “asked” or “answered” or “replied” may be perfectly useful–very descriptive, evocative, clear (people do after all mumble and murmur and whisper; they sometimes cry out or exclaim, insist or demand) (but remember, they don’t “hiss” unless there’s some sibilance in what they say)–more often such verbs call attention to themselves, bespeaking the writer’s effort, and that–usually–isn’t what we’re after.

Granted, there are comic possibilities–and Tom Swifties aplenty–in such verbs when applied to dialogue.  No rules, then.  Only guidelines.

Punctuating dialogue?  I’ll put that in a separate post.

About those dialogue tags, one of my about-to-be former students commented: “You could also mention how tags can be easily eliminated in dialogue, especially between two characters. Even without any action or description, readers can follow dialogue with only the first tag, as long as the writer has set the scene and defined the characters.”

To which I replied: “Yes, if I weren’t contending with the likes of “quipped” & “chided” I might’ve gotten into the complete absence (hmm) of dialogue tags from, e.g., some of Joyce’s work and all of (William) Gaddis’s, about which Cynthia Ozick said, in a review of Carpenter’s Gothic, ‘It is dialogue that does without quotation marks, preceded instead by a serenely poised dash–a brilliant significant Joycean smudge that allows no closure and dissolves voices into narrative, turning the clearest verisimilitude into something spectral. Speech is fragmented, piecemeal, halting and stunted, finally headlong. . .'” 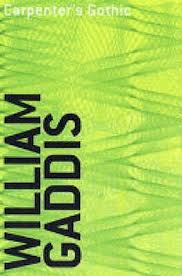 Which I’m adding, just because I wanted to get the Cynthia Ozick quotation in there, along with a mention of William Gaddis’s wonderful book. 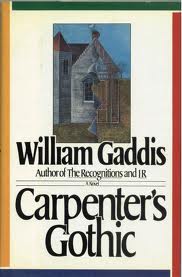