On “The Buried Giant” and Kazuo Ishiguro

My review of Kazuo Ishiguro’s odd new novel, a tale of post-Arthurian England invested with fantasy and myth and fading memory.

Neil Gaiman, on the front page of the NYTBR, had a similar reading, but said more about fantasy.

And in the Guardian, Alex Preston takes a longer long at Ishiguro in light of the new book. 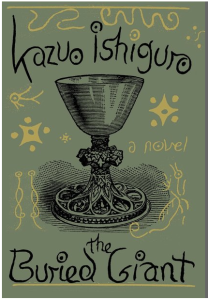 The Buried Giant, Ishiguro’s first book in a decade, has some of the strange mystery of his other novels but with a new sort of wistful confusion, which makes sense, in view of what Ishiguro has had to say about what he was thinking about while writing the book, not only the issue of collective memory, represented in this novel as a kind of societal amnesia necessary for going beyond the wrecks of the past, but also the diminution of aging, a questioning and a loss of acuity that he himself has perceived over the last few years. Though one could also call this a new kind of awareness, a closer mirroring in consciousness of worldly entropy.

Interviewed by Susannah Hunnewell in the Paris Review‘s Spring 2008 issue, Ishiguro said of The Unconsoled, which the old, meaner version of James Wood said invented “its own category of badness,” while others recognized it for the masterpiece it is:

It’s never my intention to be willfully obscure. The novel was as clear as I could make it at the time, given that it was meant to follow dream logic. In a dream, one character often will be portrayed by different people. I used that technique and I think that led to some confusion. But I wouldn’t change a word of The Unconsoled. That’s who I was at the time. I think it has found its place over the years. I get asked about it more than anything else. When I’m touring with a book, I know that a section of the evening has to be devoted to The Unconsoled, particularly on America’s West Coast. Academics write about it more than any of my other novels.

Speaking of his first novel, A Pale View of Hills, Ishiguro said:

I’m very fond of it, but I do think it’s too baffling. The ending is almost like a puzzle. I see nothing artistically to be gained by puzzling people to that extent. That was just inexperience—misjudging what is too obvious and what is subtle. Even at the time the ending felt unsatisfactory.

Though this may be exactly what I loved about it, when it was the hot new thing in Britain but still not known in America, and a woman from the London office of the company where I was working gave it to me for just that reason: Here’s what we have. And that may also be why it remains my favorite, even though I recognize the superiority of the other as literature, capital L.

This entry was posted in Blog, Reviews and tagged A Pale View of Hills, Alex Post, interviews, Kazuo Ishiguro, reviews, Susannah Hunnewell, The Buried Giant, The Paris Review, The Unconsoled. Bookmark the permalink.