http://tinyurl.com/llz7fff
Today on NPR (“Weekend Edition Sunday”) linguist Arika Okrent was talking about changes in English.  When the host said she could hear her 4th grade English teacher saying such-and-such, Okrent remarked that most of what we think of as rules are just whatever someone in authority told us.  Which made me think of the every English teacher’s favorite guide, the venerable Strunk & White, 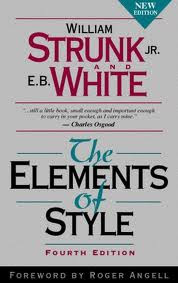 which, on its 50th birthday, was treated to a scathing review by linguist Geoffrey Pullum (http://tinyurl.com/nvovyh), who pointed out the many flawed or downright wrong rules laid down in that book (don’t split infinitives, don’t end on a preposition, don’t use the passive voice), to which Grammar Girl, a wonderful resource, responded (http://grammar.quickanddirtytips.com/strunk-and-white.aspx) that though it might be used as a rule book, The Elements of Style is just that, a guide to style–though apparently it was just Strunk’s habit to say whatever had to be said briefly and boldly, which gave his guidelines the sound of imperatives.