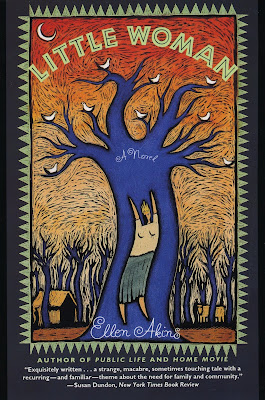 Beauty Skinner is, as she herself admits, a woman to whom small men have never been indifferent, that most unfortunate of females, a “big girl.” Beauty is fated to be the subject of unbelieving stares, to stop conversations, and to realize with every lumbering step that towering ungainliness is the inescapable fact of her life.

But in Ellen Akins’s fierce comedy Little Woman, escape is precisely what Beauty manages. After almost accidentally killing her twin sons (the product of a peculiar marriage into which she has stumbled), Beauty decides to head for greener pastures alone. Her cunning plan: to set up a rural shelter where needy women can be rehabilitated, a shelter that is designed to fail quickly, leaving Beauty a cozy retreat of her own. Her willing tool: the guileless philanthropist-heiress Clara Bow Cole, who is all too pleased to apply her wealth to this altruistic adventure. A plot of land and a house are secured, a group of down-and-out women is solicited, and Clara Bow and Beauty depart for the wilds of Wisconsin to await their charges.

What arrives, however, are hardly the wretched souls that Beauty has anticipated. Molly, Kathy, Gigi, Lynn, Cathy, Elizabeth, Cora, Joan, Barbie, and Mary Belinda are, in fact, a ferocious and intractable crew. Thieves, drunkards, and runaways, they greet their new life with a raunchy stubbornness that leaves Beauty nonplussed as she becomes determined to make her bogus venture work. She insists that her diffident charges eke an existence out of the wilderness, a task that turns their colony into something like Robinson Crusoe’s island in a bad year, and its occupants a distaff counterpart of Lord of the Flies.

While its heroines’ battles to survive nature–and one another–have hilarious (and ultimately tragic) consequences, Little Woman takes an unsparing look at the struggle to form families and communities, and how people’s need for control renders any sort of bond between them suspicious.

“A book that defies labeling but is nevertheless hard to put down . . . never less than thoroughly engrossing.”
—Susan Dooley, Self

“Delightfully inventive . . . pleasurable, and by the end poignant, reading. The dialog is crisp and witty, the characters fascinating, the twists of plot surprising and fulfilling . . . Akins is a talented young writer with a startling, original voice.”
—Ronald J. Rindo, Milwaukee Journal