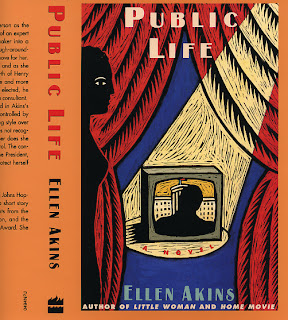 “For a novel about superficiality, Ellen Akins’s Public Life is startlingly—seductively–deep.Public Life is intense, idea-dense, and infused with a sense of tragic urgency. Once you’ve experienced the making of a president, Akins-style, you’ll never watch a presidential campaign–or a president–quite the same way again.”
—Chicago Sun-Times

For Ann Matter–once a daringly original filmmaker, now an improbably successful director of commercials–the invitation was extraordinary. Governor Henry Anderson needed a media adviser in his campaign for the presidency; would she accept the job? Though she has had little experience, or interest, in politics, the challenge proves irresistible–to take an unpolished but charismatic politician and remake him, marketing him to the American people as the incarnation of their most cherished ideals.

Ellen Akins’s third novel, Public Life, is an exploration of how images have come to rule our lives, from the highest levels of government to the edgy accommodations of sexual politics. Akins’s world is one saturated with print and pictures, where power is a function of how skillfully one manipulates the media. It is a world in which Ann Matter moves all too confidently, only dimly aware of its seductions. Under her guidance, Anderson is victorious in his presidential bid, and Ann is rewarded with a position on his personal staff, responsible now for preserving the image she so brilliantly created.

That image proves so compelling that Ann herself is won over by it, unwittingly setting illusion and reality on a collision course. As Ann’s own precarious equilibrium is undermined by the persistent incursions of her past, Anderson’s presidency is propelled into a series of scandals thta expose the hollowness at its core.

In Public Life Ellen Akins has written one of the most searching and original political novels in years, a book as remarkable in its relevance as in its imaginative power.

“The entrancing compulsions of presidential politics hook a young filmmaker with a powerful talent for short commercial films.  She undertakes the task of massaging the public image of an attractive candidate, all the while believing that at his core he is worth the effort to elect him.  Tragically for herself and others, the reality is not strong enough to sustain the illusion.  Akins, an award-winning author of three novels . . . here makes a genre that is normally high on action and low on character development achingly introspective.  She has a wonderful ear, and her dialogs are vividly genuine.  Akins challenges the reader with a narrative style that is elliptical and complex–a style that owes more to the love of words and expression than to satisfying mass market appetites.”
—Library Journal