The Poetry of Donald Rumsfeld 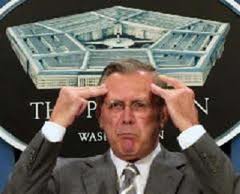 In a wonderful rambling piece on inspiration by Joyce Carol Oates in the New York Review of Books, I came upon this rendering of Rumsfeld’s famous “unknowns” remarks by poet Hart Seely:

More often found poetry is meant to be satirical or witty, or mordantly ironic, as in Hart Seely’s appropriated material titled Pieces of Intelligence: The Existential Poetry of Donald H. Rumsfeld (2003). Here is a complete poem by Rumsfeld/Seely:

Donald Rumsfeld, 2-time secretary of defense, has made another ill-advised decision to invade–this time, the public arena, with a book called Rumsfeld’s Rules: Leadership Lessons in Business, Politics, War, and Life.  On page 52, he gives us a doozy:  “Learn to say, ‘I don’t know.'”

This gives us an opportunity to remember Rumsfeld at his most philosophical, and most poetic.  Here he is on February 12, 2002, talking to the press about evidence (or lack thereof) that Iraq possessed weapons of mass destruction:

This (and Rumsfeld’s language, generally) prompted one of my favorite comic writers, Frank Gannon, to write a piece that appeared in the June 9, 2003 “Shouts & Murmurs” section of the New Yorker:  “Donald Rumsfeld Orders Breakfast at Denny’s”

That’s a good question. Am I ready to order? Let me answer it a little off to the side.

First of all, there are things that we know. I can look at this menu and see that. But there’s a danger there. Do I “know” that hash browns are not included in the Original Grand Slam Breakfast? It says that on the menu, which, by the way, is nicely laminated and we’re grateful to the laminator. But getting back to the hash-brown potatoes. I should “know” that they’re not included.

The real truth is, there are no “knowns.” This is a whole new menu. Are we in the past? No. Are we using the past’s menu? No. Are there things that we know we know? Not exactly.

By the way, the Meat Lover’s Skillet is a fine piece of work. Thank you for putting that together.

Now, as far as ordering. First, juice. And a small glass of skim milk. Then, to answer the question that I know you were going to ask, yes, this maybe isn’t the healthiest place to eat, but we’re here. That much is not debatable. We’re here. Here. Not someplace else. Not there. Back in philosophy class, that’s what we used to call a “given.” Now, who said we should be here? We don’t know. Who picked this place? I can’t say. Who drove the car? I wasn’t paying attention. Who’s paying for this? That will become clear. Where do we sit? Anywhere you like. Do you like a booth or a movable seat? Makes no difference. Do you want to sit facing the door? Not at this time.

All these questions are not “givens.” We can talk about them and we will talk about them when the time is right. Now is not the time or the place to talk. It’s the time to order, and that’s exactly what we’re doing.

Now, another thing. Does this place have a hell of a lot of cholesterol on the menu? Sure. Does cholesterol result in clogged arteries? Probably. Do clogged arteries cause cardiac events? Sometimes. Is it a good idea to clog up all your arteries so your blood stops moving completely? I doubt it. Has the blood completely stopped moving in several parts of my body? Sure. Am I going to grab my chest, fall on the ground, and twist my face into a grotesque mask of pain? Absolutely. Am I gonna go ahead and order the Original Grand Slam Breakfast? You betcha.

Look. I want bacon and sausage. Now, let me stop right here. Bacon is, we all know, and nobody seriously doubts it anymore, very similar to sausage. They both come from pigs, they’re both cooked, and they’re both eaten. They’re similar. S-I-M-I-L-A-R. They’re not the same. S-A-M-E. If they were the same, I wouldn’t be ordering both of them. I don’t think the most liberal person in the world can deny that, unless he wants to maintain the existence of a parallel universe, with spacemen and ray guns.

Now, is there going to be a cost for this? Sure. Will it be a high cost? I don’t know. Am I going to pay for it? Don’t know. Am I going to pretend I’m going to the bathroom and then just bolt on the check? Maybe. Are they going to catch me getting into my car? Not if I send somebody out to start the car and pull it up right outside the door so I can just run out and dive into the back seat. Do I have a good chance of getting away with it? Absolutely. Is this a crime? I personally think of it as defending myself from breakfast items of exorbitant price. Period.

Thank you very much. ♦

If only Frank Gannon had been secretary of defense.

(And if you haven’t read it, the piece that introduced me to Gannon was in his book Yo, Poe, reprinted in the “Readings” section of the May 1987 issue of Harper’s Magazine, and included in a performance of Selected Shorts.  It’s called “I Know What I’m Doing About All the Attention I’ve Been Getting” and it’s worth finding, as is virtually anything the guy writes.)

This entry was posted in All, Blog and tagged Donald Rumsfeld, Donald Rumsfeld Orders Breakfast at Denny's, Frank Gannon, Harper's, I Know What I'm Doing About All the Attention I've Been Getting, known knowns, New Yorker, Rumsfeld's Rules. Bookmark the permalink.