Coetzee, The Childhood of Jesus, a review

The Childhood of Jesus 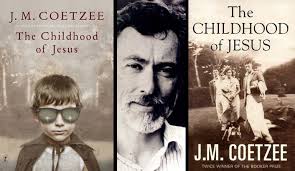 Nobel Prize-winning novelist J.M. Coetzee, now widely understood to be a reclusive crank, said in a 1983 interview that where everyone sees “bleakness and despair in my books … I see myself as writing comic books, books about ordinary people trying to live ordinary, dull, happy lives while the world is falling to pieces around them.” That in itself is comical, because my guess is Coetzee wouldn’t know ordinary if it hit him in the face. But the world falling to pieces? He gets that.

And of course it’s hard to see what’s comic, because we’re given such a lot of allegorical nonsense to puzzle through. Here, for instance, we have “The Childhood of Jesus,” a story involving a father figure, a virgin mother, and an exceptional child who wants to bring people back to life and makes inconvenient pronouncements like, “I am the truth.”

The kid’s name, however, is David — but it’s a name that’s been given to him (along with an approximate age, 5) at a relocation center, on his way to a new life. On the ship that carried him over the sea from his old life, he lost his mother and gained a guardian, Simón, the middle-aged man who shepherds him through the book.

Simón has made it his mission to find the boy’s mother, and when he sees an elegant tennis-playing woman at a strange resort-like place called the Residencia, he is convinced he’s found her. Stranger still, the woman, Inés, agrees to take the child. Up until then, the book has had the Kafkaesque feel of incomprehensible logic. Simón and David, “washed clean” of their past and memories, encounter a bureaucratically administered world in which all is accounted for — food and shelter and work and, to a minimal extent, amusement — except anything unique, inspired, or strange. No passion. No irony.

Simón turns David over to Inés, and much of the rest of the book is taken up with Inés’ bizarre version of mothering (her overprotectiveness infantilizes the child) and Simón’s fathering, which takes the form of reading lessons and philosophical discussions about numbers (a sticking point for poor, strange, exceptional, bratty David) and “the real,” continuing the pseudo-Platonic exchanges Simón has had with his stevedore comrades. (“The spirit of the agora,” his congenial foreman, Álvaro, says, “Who is going to respond to our eloquent friend?”)Coetzee has gone a little crazy, as was evident as far back as his 1999 Booker Prize-winning novel “Disgrace” (when he became more interested in making amends than in making fiction) and as came into full view in his 2012 commencement speech at Johannesburg’s University of Witwatersrand (in which he exhorted the male graduates to become teachers of young children). And yet, his craziness still takes a fictional form that is as provocative as it is readable. Who knows what this fable-like story means? I don’t. But it’s still more fun, more interesting to read, than just about anything else. And if that’s not a comic book, I don’t know what is.

This entry was posted in All, Blog and tagged Childhood of Jesus, Coetzee, Minneapolis StarTribune. Bookmark the permalink.