In Pinelight, a novel by Thomas Rayfiel, 2 views

On December 21, the Minneapolis Star Tribune published my review of Thomas Rayfiel‘s novel, In Pinelight.  Shortly thereafter I found a much longer (comprehensive) (better) review in Booklist, by Brian Gittis, who managed to anticipate the reaction many readers might have to the “wall of prose” that confronts one upon opening this novel–and at the same time, to explain why the prose should be as densely presented as this, why it works if one has the patience to go along with it.  Here’s a sample from inside the novel: 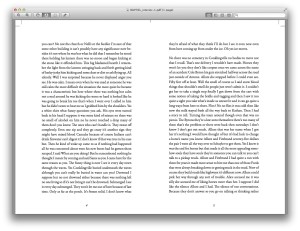 And here’s my review, from the Star Tribune:

You might get a ways into In Pinelight and begin to wonder: How long can the author keep this up? As long as it takes, as it turns out. A very old man (William, as we learn later) — prompted, interrupted and redirected by an interviewer whose questions must be inferred — is telling the story of his life, in fact his whole world, whose intimate dramas sometimes reflect, sometimes intersect with, and sometimes transcend his times. The novel unfolds as speech, with its circuitousness and halting rhythms, like stream-of-consciousness if it were spoken — and while it takes some getting used to, it is truly a tour-de-force, masterly in the way it eases flights of lyricism from William’s artless-seeming yet remarkably artful testimony.

Thought by his townspeople to be something of a half-wit, but identified as the “strongest old bastard I ever saw” by his keeper in the seniors’ home where he now sits, William is in possession of nearly a century’s worth of local lore, all filtered through his own experience and his odd mixture of wisdom and innocence. 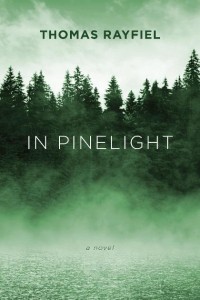 In PInelight, by Thomas Rayfiel

The setting is the Adirondack region of New York, a small town situated on Lake Sacandaga, a reservoir created in 1930 with the flooding of a town. Like the town that lies beneath the water, a lost world at once present and submerged is contained in William’s speech, its drama now shimmering through, now obscured by his matter-of-fact insights.

Also representative of that lost world is William’s work, carting goods (and, during the Vietnam years, fallen soldiers) with drayhorses (one of whom, Allure, prompts some of William’s most touching observations, reminiscent of Chekhov’s cab driver who in his lonely grief “tells the little horse the whole story”). This work gave William exposure to a “clinic” and its charlatan proprietors, long-since disappeared, who purported to possess a youth-preserving elixir, and who employed his sister, also disappeared, trailing scandal and mystery.

The delivery business also somehow involves William with Lebrun, a brilliantly successful entrepreneur developing lakefront property into summer homes for people very alien to those who populate these towns. Buried in William’s lifelong friendship with Lebrun and in his marriage to Alice are a slew of secrets that William somehow manages to report without knowing any better, though there’s always some question about how much he wants to know.

What he does know, what he says, especially now that age and confusion have sidelined him, would seem to be beyond the ken of any one supposedly simple man — and any one writer. And yet Thomas Rayfiel is able to make William’s story proceed in a way that only the most remarkable artifice might render natural, and to reflect, in its utter seriousness and comic juxtapositions, human nature at its most particular and abstract.

Why does Alice marry William? What was that clinic selling? Is William’s sister alive, or overwhelmed by the water as well? Are Lebrun’s houses, attracting movie-star types, part of a larger plan (or plot)?

Everything and nothing is meaningful in a way that makes one man’s life, and his account of it, the sole repository of significance. And to turn that idea into language is Rayfiel’s extraordinary gift.