“As Mexican guns began to fire the Americans noticed a curious phenomenon. Owing most probably to a combination of poor Mexican gunpowder and the rarified mountain atmosphere, the enemy cannonballs left a blue streak behind them, often allowing Doniphan’s men to dodge the danger. It struck the men as being so remarkable that afterward they began using the phrase ‘blue streak‘ to describe anything that had great speed or intensity, thus introducing a new expression into the common lexicon.”–from Kearney’s March: The Epic Creation of the American West, 1846-1847 by Winston Groom (yes, that Winston Groom, author of Forrest Gump)

Jonathan Franzen’s interminable and amusing footnote (from a translation of a 1912 essay by Karl Kraus), reprinted in the September Harper’s, reminded me first of my husband’s favorite footnote, from A. J. P. Taylor’s The Struggle for Mastery in Europe, 1848-1918:

“It becomes wearisome to add ‘except the Italians’ to every generalization.  Henceforth it may be assumed.”

And then, of course, the best footnote literature ever, by Robert Benchley:  “Shakespeare Explained:  Carrying on the System of Footnotes to a Silly Extreme”–copied below for anyone unlucky enough to have missed The Benchley Roundup (and every other volume in which this and Benchley’s other brilliant comic pieces appeared).

Carrying on the System of Footnotes to a Silly Extreme

[1]Flourish: The stage direction here is obscure. Clarke claims it should read “flarish,” thus changing the meaning of the passage to “flarish” (that is, the King’s), but most authorities have agreed that it should remain “flourish,” supplying the predicate which is to be flourished. There was at this time a custom in the countryside of England to flourish a mop as a signal to the passing vender of berries, signifying that in that particular household there was a consumer-demand for berries, and this may have been meant in this instance. That Shakespeare was cognizant of this custom of flourishing the mop for berries is shown in a similar passage in the second part of King Henry IV, where he has the Third Page enter and say, “Flourish.” Cf. also Hamlet, IV, 7:4. 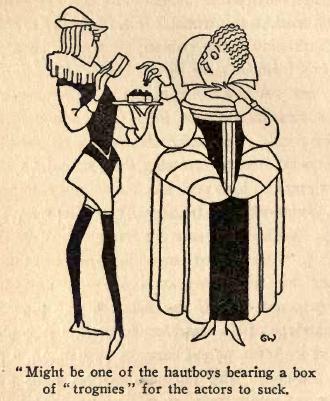 [2]Hautboys, from the French haut, meaning “high” and the Eng. boys, meaning “boys.” The word here is doubtless used in the sense of “high boys,” indicating either that Shakespeare intended to convey the idea of spiritual distress on the part of the First Lady-in-Waiting or that he did not. Of this Rolfe says: “Here we have one of the chief indications of Shakespeare’s knowledge of human nature, his remarkable insight into the petty foibles of this work-a-day world.” Cf. T.N. 4:6, “Mine eye hath play’d the painter, and hath stell’d thy beauty’s form in table of my heart.”

[3]and. A favorite conjunctive of Shakespeare’s in referring to the need for a more adequate navy for England. Tauchnitz claims that it should be pronounced “und,” stressing the anti-penult. This interpretation, however, has found disfavor among most commentators because of its limited significance. We find the same conjunctive in A.W.T.E.W. 6:7, “Steel-boned, unyielding and uncomplying virtue,” and here there can be no doubt that Shakespeare meant that if the King should consent to the marriage of his daughter the excuse of Stephano, offered in Act 2, would carry no weight.

[4]Torches. The interpolation of some foolish player and never the work of Shakespeare (Warb.). The critics of the last century have disputed whether or not this has been misspelled in the original, and should read “trochies” or “troches.” This might well be since the introduction of tobacco into England at this time had wrought havoc with the speaking voices of the players, and we might well imagine that at the entrance of the First Lady-in-Waiting there might be perhaps one of the hautboys mentioned in the preceding passage bearing a box of troches or “trognies” for the actors to suck. Of this entrance Clarke remarks: “The noble mixture of spirited firmness and womanly modesty, fine sense and true humility, clear sagacity and absence of conceit, passionate warmth and sensitive delicacy, generous love and self-diffidence with which Shakespeare has endowed this First Lady-in-Waiting renders her in our eyes one of the most admirable of his female characters.” Cf. M.S.N.D. 8:9, “That solder’st close impossibilities and mak’st them kiss.”

[6]Ho!. In conjunction with the preceding word doubtless means “What ho!” changed by Clarke to “What hoo!” In the original MS. it reads “What hi!” but this has been accredited to the tendency of the time to write “What hi” when “what ho” was meant. Techner alone maintains that it should read “What humpf!” Cf. Ham. 5:0, “High-ho!”

[7]Where. The reading of the folio, retained by Johnson, the Cambridge editors and others, but it is not impossible that Shakespeare wrote “why,” as Pope and others give it. This would make the passage read “Why the music?” instead of “Where is the music?” and would be a much more probable interpretation in view of the music of that time. Cf. George Ade. Fable No. 15, “Why the gunny-sack?”

[10]music. Explained by Malone as “the art of making music” or “music that is made.” If it has but one of these meanings we are inclined to think it is the first; and this seems to be favored by what precedes, “the music!” Cf. M. of V. 4:2, “The man that hath no music in himself.”